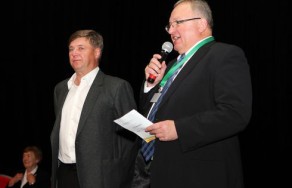 Representatives of the union of breweries and malt houses followed, lead by Executive Director Jan Veselý, who shared information about the Initiative of Responsible Breweries in the Czech Republic, current local topics, and the newest information from the European beer association, the Brewers of Europe.

After this, researchers and suppliers of beer equipment, together with barley, malt and hops specialists from the Czech Republic and from abroad led the discussion. Researchers focused on the current topics they are addressing with their teams, and they showed brewers what to do to maintain the excellent reputation of Czech beer.

The work attitude of the seminar is best illustrated by a  comment from Prof. Ing. Basařová DrSc. directed to young professionals in the field: „Don't forget about our predecessors – brewers who spent years building the reputation of Czech beer around the world. With each technological step and decision, think about this reputation–not only about how you can maintain it, but how you can further spread it!“

Farmers and cultivators discussed the current state and development of new kinds of barley, which in the future should help to provide enough Czech ingredients for malt brewing and beer making with the Czech beer seal.

Similar topics were discussed by hops growers who spoke on the development of Czech hops growing in the past and in the present, and also discussed future development. They also presented the new kinds of hops they are currently working on, and the characteristics of these hops. In addition, researchers from Weihenstephan University in Munich spoke about topics which they are dealing with.

The words of Václav Berka from Plzeňský Prazdroj lend support to the idea that the beer–making industry is a traditional trade even with the use of new equipment. „The goal that organisers of the 1st Beer-Malt Seminar set in 1958 is identical with the goal of today's 35th Beer-Malt Seminar. That is to share knowledge about beer and professional information among Czech and international specialists, to share experiences from the cultivation of ingredients, from the making of malt and beer and from technological fields. Another equally important goal of these two days is an informal exchange of opinions and experiences among brewers, beer specialists, and suppliers. I am guessing, based on the reactions from participants, that all goals were met.“