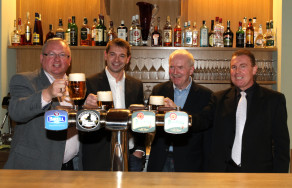 Aside from its premium lager Pilsner Urquell, Restaurant U Labutě also serves Kozel dark and non-alcoholic Birell. The certificate of quality number 990 was presented to the owner, Antonín Částka, by senior business brewer from Plzeňský Prazdroj Václav Berka. „I have to say that today I am doubly happy. It is always nice to reward a pub that takes good care of our beer thereby taking care of their customers. Then there are pubs which have a long-lasting tradition and interesting history. I consider the rebirth of the legendary restaurant U Labutě to be a little miracle which reminds us that Plzeňský Prazdroj’s natural focus on tradition definitely has meaning. I hope that our certificate will help restaurant U Labutě, and I wish them a lot of successes in the future,“ said senior business brewer from Plzeňský Prazdroj Václav Berka.

After an extensive one year renovation, restaurant U Labutě finally opened for its customers on July 15th. In the past, the restaurant was specifically known for its Pilsner beer, and now it wants to continue in this tradition. As far as the cuisine goes, the restaurant is focusing mainly on classic Czech cuisine together with different meats on the grill.

„Receiving a certificate for excellent care of Pilsner beer is the next logical step in our quest to recapture the renown which the beer gave our restaurant. Of course, we realize that the certificate itself isn’t enough to strengthen our name, which is why we all try to give maximum care to the beer and to the restaurant. In less than six months, we can say that we already have regular customers who appreciate good quality beer, “said Antonín Částek, owner of restaurant U Labutě in Prague’s Krč.

Also at this event, International soccer player, Pavel Kuka, gave his jersey to the owner of the restaurant, Antoní Částek, who is a big fan of Slavia. Then they both signed a soccer ball and with this they sealed the friendship between Pilsner Urquell, U Labutě restaurant and Slavia Prague.

Restaurant U Labutě was founded on the verge of the 15th and 16th centuries, becoming the first place for changing horses on the road from Prague to Vienna. According to the archive, the first beer delivery from the City brewery in Plzeň dates back to 1930. That year, 120 hectoliters of the golden nectar from Plzně were delivered to U  Labutě. Until 1989, the place was a famous restaurant, sought after by regular customers who love the Pilsner Urquell brand, as well as by famous and important personalities. However, after the Velvet Revolution, its fame withered for about 20 years until November 2008 when Antonín Částek became the new owner.