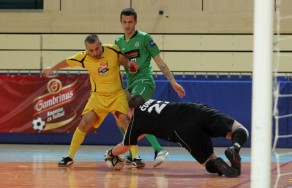 The rules were that anybody goes after anybody and they played one 14-minute period. The goaltender saw in front of him a fast exchange of groups of five players, which was due to a fast and physically challenging game. FK Baumit Jablonec made two teams, which they named seniors and juniors. The seniors’ team included for example Matěj Krajčík, Luboš Loučka, Karel Piták, David Lafata, Marek Jarolím. The goalie for the winner of the tournament was Michal Špit. „For us this is a very nice way to mix up our training, it’s a lot better than jogging” Lafata said happily. “It’s part of our preparation, we gave it our all,“ said Tomáš Pekhart, the biggest star of the juniors team from Jablonec, who missed first place by one goal, in explaining the approach of the Gambrinus league players.

A match between team members from Jablonec, which was the pinnacle of the entire tournament, ended with a 3–3 tie. The seniors secured first place with a higher count of goals in earlier matches. That did not change the fact that SK Camel Jablonec was able to get a goal past Michal Špit. Successful players from We Kick for Soccer worked hard, pushed themselves and totally gave it their all, only to in the end experience happiness from a scored goal. „It was great, but it all happened so fast. One can see that we are several leagues apart. The men played great, all fans must have loved it,“ captain of the Baumit Camel, Bohuslav Staněk, spoke highly of the tournament and of the matches with the players. „One can see that there is a big difference between us. It is great that our coach, Míra Pačes, entered us into the project,“ added his team member, Ladislav Janků. The team from the regional championship took third place thanks to a 5–1 win with the Polish Almar Szklarska Poreba team. Even player Tomáš Pekhart appreciated the accomplishment by Camel. „You can see that the boys know how to play soccer, they are good. The biggest difference was in physical endurance, but as far as the actual game went, they were really good.“ After such warm words, Camel could go for a beer. Gambrinus must have given them double the pleasure.

The Gambrinus project called We Kick for Soccer to which ČMFS (Football association of Czech Republic) contributed also, took off in 2010. And besides material support for the teams from the last game up to regional championships, it gives teams an opportunity to compete for exclusive experiences with teams from the Gambrinus league. Besides meeting the professionals, they can also win a training session with a coach from the Gambrinus league and other interesting prizes. Currently, there are 400 teams in 13 regions in the project.