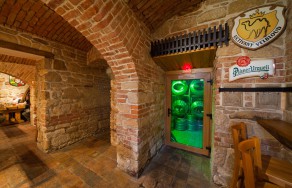 „Probably nowhere in Europe nor anywhere in the world does the tank system have such widespread usage or such an elaborate network as it does in the Czech Republic, where beer’s role as the national drink plays into the cards of restaurants with tanks. The reasons for the phenomenon are the unique local beer culture and the fact that in the Czech Republic it is customary to have at least one or more brands of beer on tap,“ says Daniel Janeček, manager of technical services at Plzeňský Prazdroj.

The advantage of the tanks is that the beer will be stored under the best conditions, with a  constant temperature set between 7–10 degrees Celsius. The beer is stored in a watertight polypropylene bag (bag-in-box system), and during storage and service it does not come in contact with air or the wall of the tank. This way it does not oxidize, keeping its optimal and natural amount of CO2, which is produced during the fermentation of the beer and adds the right amount of vigor. Tanks are installed in pub restaurants with a high consumption of beer, which, together with technological advantages, guarantees that the beer in the tank is as fresh as it can be.

Beer from tanks has many advantages, mainly for the managers of establishments – they don’t need as much room to store barrels, and they don’t have to run to the cellar often to open another barrel. Chilling beer in a tank saves energy, and delivering beer in a tanker is easier. „A tank has all these advantages only for pubs with a relatively high volume of consumption, which means that they have a lot of regular customers. For other pubs, it is more advantageous to use classic beer barrels, which are familiar to most Czech beer consumers. If beer is well stored and taken care of, then there is no difference between beer from a barrel and beer from a tank, “ adds Daniel Janeček.

What does a „tank facility“ look like?
A typical pub restaurant with tanks has three to four rustproof tanks in a cool box. Tanks that are placed behind a glass wall are often a nice addition to the interior. Very popular pubs that use tanks can serve more than 100 hectoliters of beer a  month. The largest number of tank facilities with such a high volume is in Prague, and the record setter is Restaurant Anděl, whose tanks serve more than 2500 hectoliters of Pilsner Urquell a year.

Since 1996, tank facilities have served more than 3.8 million hectoliters of Pilsner Urquell, Gambrinus, Velkopopovický Kozel and Radegast beer. The most popular brand is Gambrinus, which is served in 342 tank facilities. Pilsner Urquell is the only Czech beer that sends its beer in tankers beyond the country’s borders to one facility in Vienna and to nine restaurants with tanks in Slovakia.

Interesting historical information
The first two modern tanks could already be seen in Czech pub restaurants in 1994, but one can say that only starting in 1996 can we talk about the real implementation of tank technology, the „bag-in-box“ system, in Czech pubs and restaurants. Pioneers of tank technology were breweries owned by Plzeňský Prazdroj. Historically, the first Czech tank facility with the new type of tank system was found in U Korbele, a pub restaurant in Plzeň, that served Gambrinus on tap.

At the beginning, difficulties in the implementation of new tank facilities included owners who had a rather conservative approach to the technology. For example, Karel Hulata, owner of U Zlatého Tygra, the legendary pub restaurant in Prague, toured other pubs that already had tanks installed to find out for himself that the new system of storage and service would not influence the renowned quality of his beer. Eventually, restaurant and pub owners realized the advantages of new beer tanks, and interest in the installation of the system grew.