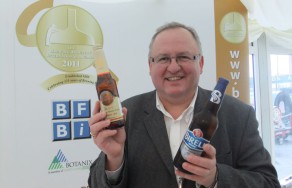 „The golden success of Master and Birell is even bigger because these are the first medals that our beers ever received, and it was in a  competition with such a rich tradition. It isn’t by accident that it is referred to as the „Oscars for Beer“,“ Václav Berka, senior business brewer of Plzeňský Prazdroj, commented on the success with satisfaction.

The beer tasting competition is divided into nine categories: lagers, dark beers, porters, stouts, ale–type beers in kegs, non–alcoholic beers and beers with a low amount of alcohol, special and strong beers. The best beers in each category were announced on the evening of Friday, February 11.

The prestigious international competition consisted of interesting judges. The results were in the hands of 30 judges, including five women, from 14 countries from around the world. The team of judges consisted mainly of brewers from breweries. The head of the entire competition was Bill Taylor from Australia, who selects judges to ensure that large–, medium– and small–sized breweries are all represented.