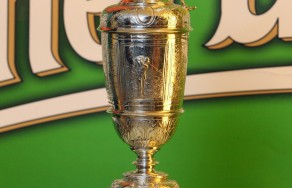 The first steps of the American delegation lead them to the Malostranská Beseda restaurant where the group, consisting of 29 men and 6 women, met the general director of Plzeňský Prazdroj, Doug Brodman. In the days following, the Americans visited the historical centre of Prague and experienced the Czech beer culture. At U Pinkasů they witnessed how the winner of the title International Pilsner Urquell Master Bartender 2010, Lukáš Svoboda, presented and served Pilsner beer.

On May 4th, the Tent and Blake group went to Plzeň, where it visited the Plzeňský Prazdroj brewery accompanied by the senior business brewer, Václav Berka, together with other important representatives of the brand. Then Václav Berka showed his guests a presentation on pairing beer with food at the Formanka restaurant. During the next few days, the American business partners, in addition to their daily discoveries of restaurants in Plzeň, visited an exhibition of historic war carriages as part of the celebration of the liberation of Plzeň by the American army.

„We have a place called Zepplin Hall. It is the first beer garden in New Jersey with authentic Czech atmosphere. Thanks to the Pilsner Urquell history and heritage, the Pilsner lager is very popular and we serve 15 barrels a month of it. The patrons as well as the staff love the quality of this beer and they savour it from one-litre beer pitchers,“ said Jonathan Wurm, one of business representatives of Pilsner Urquell in the U.S.

The American guests were impressed by the atmosphere of the brewery, by Czech pubs, and especially by great Czech cuisine and above all by the quality of Pilsner beer from tap. Many of them had not travelled beyond the borders of the U.S. before, so to get to know a completely different, Czech, beer culture, especially in the presence of the charismatic Václav Berka, was an unforgettable experience which will add to the support of the Pilsner Urquell brand on the American market.

Facts about Pilsner Urquell in the U.S.

The first Pilsner arrived in the U.S. in 1873. Today, the U.S. is one of the five key export markets of Pilsner Urquell beer. In the past seven years alone, Plzeňský Prazdroj exported close to a million hectolitres of the Pilsner lager (992,000 hl) to the U.S.

The most popular packaging among Americans are bottles (70% of the total sold volume), followed by restaurants with beer in barrels (25%), and cans have a 5% share.

In addition to traditional marketing strategies, Pilsner Urquell is betting on ambassadors to spread the popularity of this beer in the U.S. The title Honorary Pilsner Urquell Ambassador in the U.S. was lent, for example, to director Miloš Forman and to Petr Bisek, manager of the famous Pilsner restaurant, Bohemia Hall & Beer Garden, which is celebrating its 100th anniversary this year. These people know the history and the production process of the Pilsner lager type beer around the world and know how the beer should be cared for so that it keeps its superior taste.