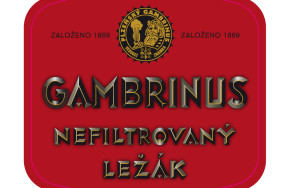 The grand launch of Gambrinus unfiltered lager took place at Hostinci Na staré Kovárně in Holešovice, where the first litres were served by members of the band Tři sestry, who have been tied to the brand for long time. Representatives from Gambrinus gave them a 30L barrel of unfiltered Gambrinus lager as a gift for the celebration of the 26th anniversary of the birth of their band and wished them a good start on the Gambrinus Tour 2011, which starts on May 27th.

Ever since the founding of the Gambrinus brewery in Plzeň, in 1869, it was a tradition to greet important guests with unfiltered Gambrinus beer. Brewers would bring eight–litre jugs from the brewery’s cellars and offer them to visitors in a room called „the drink room.“

This golden nectar with its typical cloudiness caused by malt, without any disruptive shades, varies from traditional beer in numerous ways. It has one million live yeast cells for a millilitre of beer. So, one beer has more than five hundred million yeast cells. It is also characterised by a  higher amount of group B vitamins in comparison to other beers.

Jan Hlaváček, head brewer at the Gambrinus brewery, describes his experience:
„When one savours a sip of this unfiltered lager, one can detect the apparent aroma of fresh brewer’s yeast and this aroma is perfectly in sync with the malt aroma. It has bitter hop particles which make for more robust and fuller taste.“

Filtering, which means removing parts that make the beer cloudy, began in the second half of the 19th century, so the beer does not go bad and can be transported longer distances.

„We are happy that, thanks to our technological development, we can now offer our clients unfiltered Gambrinus lager directly in their favourite pub. We believe that this offer will excite our consumers,“ Martin Rosička, Senior Brand Manager of the Gambrinus brand, commented about this special offer.

Unfiltered and unpasteurized beer is very demanding in terms of handling and storage, which is why it is not widely available. People can taste this beer only in selected pubs which meet demanding criteria: care of beer, storage and sanitation.

You can find a complete list of restaurants serving unfiltered Gambrinus lager at www.gambrinus.cz