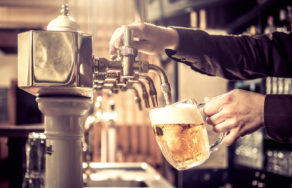 2018 was a very successful year for Plzeňský Prazdroj. The Company managed to increase its beer exports by almost 13% and it also saw an increase in sales in the domestic market. Its economic growth thus resulted in a contribution in the amount of CZK 5 billion to the Czech state budget.

Prazdroj’s exports grew by nearly 13% last year, exceeding the 1.7 million hectolitre mark and succeeding in increasing exports to almost all significant export regions. In the domestic market, the Company managed to increase sales by 4.5%, which was not only due to the hot weather and the historically longest summer season, but also thanks to the success of its programmes aimed at supporting pubs and restaurants, e.g., helping to furnish outlets, train their staff or provide consultancy services, all this in a targeted way, taking into consideration the character of each particular outlet. For example, last year Plzeňský Prazdroj trained 1,217 pub and restaurant staff as part of the Master Bartender programme. Also very successful is the “Village” programme, aimed at putting social life back into village pubs. Over 115 establishments participated in the programme and their revenue has been growing faster than the market average.

“The higher revenues of restaurants help to stabilize and grow the entire industry, which has recently undergone a difficult phase in connection with several changes in legislation, the most significant of which were the introduction of Electronic Registration of Sales and the smoking ban. Even two years after its implementation, Electronic Registration of Sales still does not have the support of pub keepers. According to our surveys, they consider this obligation to be an administrative burden and the cause of an increase in operating costs. That is why they welcome our activities aimed at supporting pubs and look out for the VAT on beer and food to be lowered – for three out of four pub keepers, this would help their business in a major way,” says Prazdroj’s Sales Director, Tomáš Mráz.

From the perspective of the Czech economy, it is also important to note that a significant number of Prazdroj’s suppliers are Czech and Moravian companies. “We bought all our barley from domestic suppliers, with two-thirds of it purchased directly from farmers. In the case of another key raw material – hops – domestic supply represents 90% of the total amount purchased, the rest being hop varieties from abroad necessary for the production of special beers,” notes Tomáš Mráz.

Last year, Prazdroj launched several projects that will not only result in greater efficiency, but will also benefit entire communities. For example, the brewery switched to using rail freight transport between the Nošovice and Pilsen breweries, thus reducing the number of trucks on domestic roads by four hundred. The brewery also managed to repeatedly reduce the carbon footprint of beer from 7.22 kg CO2/hl of beer to 6.98 kg.