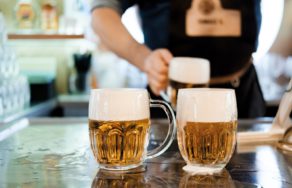 Plzeňský Prazdroj again managed to up its sales volumes in international markets last year, to a record 4.3 million HL, which is 4.5 percent more than in the year before. In the domestic market, the company sold 7.2 million hectolitres last year, thus finishing 2018 at a record high of 11.5 million hectolitres (a growth of 4 percent) sold in the Czech Republic and abroad.

Plzeňský Prazdroj has enjoyed a very successful year, with its sales growing both in the On- and Off-Trade channels, and both locally and internationally. Prazdroj’s exports grew by almost 13 % last year, exceeding the mark of 1.7 million hectolitres. The company managed to grow export numbers in nearly all of its major international markets, with the greatest increase (by almost one-third) achieved in Poland. “We are growing significantly not only in European countries but also in Russia and East Asia. South Korea is now the third biggest export market for us and we’re also doing well in Japan,” said Plzeňský Prazdroj’s Managing Director, Grant Liversage.

The company’s premium lager, Pilsner Urquell, which enjoys great popularity around the globe, is brewed exclusively in Pilsen and is exported to other countries. Last year saw over 1.1 million HL of the brand sold abroad, which is one-tenth more than in the previous year. “We grew exports of Pilsner Urquell, mainly in kegs, by almost 15 percent. Tank beer also did great. The number of our tank pubs grew from 90 to 131 last year,” Grant Liversage added.

It is not the product itself that Plzeňský Prazdroj promotes around the world: with Pilsner Urquell lager, the company exports a unique beer experience to international consumers, the same as Czechs enjoy in their local pubs. To live up to this ambition while interest in Pilsner Urquell beer keeps growing, the company intensified its training of international bartenders last year, in which more than 120 of them undertook a special training programme to become so-called Brewery Tapsters and take care of the beer’s quality in international pubs and restaurants. “We had to quadruple the capacity of this training programme last year. Our aim is clear, we want to ensure that with the growing popularity of Pilsner Urquell lager, the quality standards of tapping and pouring the lager spread at the same speed. We’ve trained over 1,000 tapsters from around the globe who can now make a perfect pour in the Smooth (‘Hladinka’) style,”said Kamil Růžek, Trade Brewmaster for export markets, commenting that the programme has been successful also thanks to the fact that those establishments that use the tapsters have grown their sales by up to one-third. The tapsters subsequently teach other bartenders abroad; at the moment, they operate in 17 countries. The greatest number of them, almost 50, are based in Poland, with Germany coming second. “We’ve also trained tapsters who operate in Asian countries – Japan, South Korea, Taiwan and Singapore,” Kamil Růžek added.