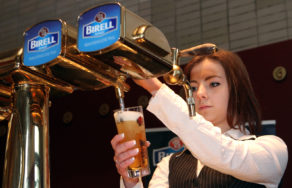 Plzeňský Prazdroj had an exceptionally strong year – in the local market, it sold 7.2 million hectolitres of beer, 3.8 % up on the previous year. The company grew sales in both the On- and Off-Trade channels, with non-alcoholic beers being the top performers, followed by lagers and ciders.

In 2018, Prazdroj managed to turn around the downward trend experienced in the On-Trade in recent years; it grew sales of its draught beers by more than 2%. This success was helped by last year’s hot weather and historically the longest summer peak, but it also reflects the positive effects of Prazdroj’s long-term efforts to support its on-premise partners, such as improving restaurant interiors and operations and enhancing the quality of service.

“I’m happy to see that our efforts have led to greater loyalty among customers and consumers. As shown by many research studies, those pubs which have engaged in our support programmes and upgraded the quality of their services grew faster than the rest of the market,” commented Plzeňský Prazdroj’s Sales Director, Tomáš Mráz.

He added that another key to success was growing the company’s concept pubs, with thirteen new ones being established last year. In addition to expanding the existing Srdcovka, Kozlovna and Radegastovna concepts, the company introduced one new concept pubs offering Pilsner Urquell lager – Plzeňka. Also successful, with a volume growth of 14 %, was its Volba sládků (Brewers Choice) programme, which has been running for five years now, with almost 1,500 pubs and restaurants engaged across the country.

In the Off-Trade, Plzeňský Prazdroj grew sales by 5% last year, including a growth in both cans and glass bottles. The record-high sales of Prazdroj were largely driven by non-alcoholic beers, which account for almost one-half of total growth. Birell sales went up by more than 20 % last year, with all of its variants contributing but especially flavoured ones and the brand’s newest range – Botanicals. Amongst consumers, Birell has secured its position as a natural alternative to sweetened soda drinks. They can enjoy it in both cans and bottles, as well as on tap.

The year 2018 also saw a growth in the lager segment. “Czechs love lagers and last year confirmed this, with a growing interest in Radegast Ryze hořká 12 and, traditionally, Pilsner Urquell and Gambrinus lagers. Overall, demand for our lagers went up by 5% last year,” Tomáš Mráz added. Last year’s launch of Kozel Master Lager also successfully contributed to the success of the lager segment.