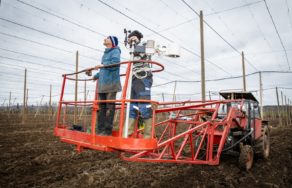 The FOR HOPS project, initiated by Plzeňský Prazdroj and the goal of which is to help farmers maintain the quality and amount of domestic hops, has been launched this week on six farms in the Saaz region. Hops in Czechia have been negatively impacted by climate change in recent years. The project will examine the impact of weather on hop growing for the entire following year, and will provide hop growers with an application which will contribute to more efficient irrigation of hop yards, as well as to saving water, which there is a lack of.

Experts from Agritecture together with farmers have installed sensitive weather stations and soil sensors on a total of 6 hop yards in the past few days. These will monitor and record important data on the temperature and humidity of soil down to a depth of 120 centimetres and in ten-minute intervals till the next harvest of hops in September 2022. The weather stations will also measure wind speed and direction, precipitation, ambient temperature and humidity, sunshine, as well as humidity on the surface of leaves of hop plants. Farmers will receive the first measured information as soon as next week. In spring, a special “hop ECG” in the form of more sensors located directly on plants will be added to the weather stations.

“All the data from the soil and plants will provide us unique information on when hops need water and how they respond to the surrounding microclimate. On top of that, Microsoft will add data from a planetary computer. This includes a huge amount of detailed information and satellite images of our planet, including historical data. We will upload all of this to a mobile application which will be able to evaluate the data thanks to artificial intelligence, and will advise hop growers when and where they should irrigate, down to the level of individual parts of hop yards. This should lead not only to water savings, but especially to preserving the quality and volume of hops,” says Ivan Tučník, Project Leader from Plzeňský Prazdroj.

In its first wave, the project FOR HOPS involves six growers from the Saaz (Žatecko) region. These were chosen in cooperation with the Hop Research Institute (Chmelařský institut) and the Hop Growers Union (Svaz pěstitelů chmele) in such a way as to cover as broad a range of soil and climatic conditions in which hops are grown in the Saaz region as possible. The technological solutions which will be created after the following harvest will be used by other hop growers, not only those in the Saaz region. About 30 experts from 3 continents are already working on the project, from Singapore to San Francisco, Belgrade to Quebec.

Czech hops give beer its unique bitter taste and exceptional smell. Together with water and barley, hops are an essential ingredient which we need to take care of so that millions of people in Czechia and around the world can always enjoy Czech beer.

Similar to other crops, hops are influenced by climate change and irregular rainfall. That is why the project FOR HOPS was created. The biggest Czech brewery, Plzeňský Prazdroj, and its mother company, Asahi, have joined up with the software giant Microsoft and the innovative technological company Agritecture to help hop growers irrigate more efficiently, and this way, contribute to preserving the quality and quantity of Czech hops.

For this, they need the most accurate data about the soil and climatic conditions in a specific hop yard. Hop growers also need to understand how and why plants respond to a specific situation. Sensors will be installed in the soil, in hop yards and on hop plants, and will gather data on precipitation, humidity and the microclimate in the soil throughout one lifecycle of plants. It´s basically a hop ECG which will provide unique information about what Czech hops need during the given season of the year and in the given weather. Microsoft and Agritecture will develop software which will be able to process and evaluate this type of data. The mobile application will then show growers when plants need water. This way, hop growers will be able to handle water, of which there is often a short supply, more efficiently and ensure sustainable growth of the precious ingredient in the future.