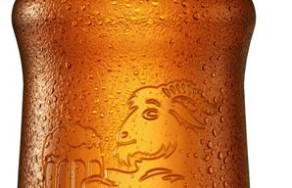 Spring is here, time for grilling, camp fires and getting together with friends outdoors. To mark the occasion, Velkopopovický Kozel has prepared a novelty. The favourite „Eleven,“ that is made from three kinds of malt with a slight boost of gentle bitterness of hops, will be now available in practical, 1.25l plastic bottles. „The bottle fits two beers plus some for basting meat on a grill. Outdoor grilling is the ideal occasion to buy beer in plastic packaging,“ explains Velkopopovický Kozel Brand Manager Vladimír Vaněk. The smaller Velkopopovický Kozel 11° bottle is easier to hold, especially for women.  It’s also a boon to hikers who like to pack their favourite Kozel for the trip.

Plastic packaging of beer has many advantages. Plastic is practical, durable, and easier to manipulate. The popularity of plastic beer packaging is on the rise with Czech consumers. By the end of 2011, plastic bottled beer represented 16% of the total packaged beer sold, a higher percentage than the share of beer in cans. These sales may be due to the weather and the coming of the grilling season. The market share of eleven degree beers is steadily expanding as well. Kozel is just answering the call of its consumers. The well crafted design of the new Kozel bottle is the work of designer Jana Čapek. There are many requirements connected with the production and design of plastic bottles. The product must comply with many technical parameters, it must not collapse on a production line, it must withstand the filling process, survive transport, and must also satisfy difficult ergonomic and aesthetic criteria.

Demand for eleven degree beers is on the rise. Velkopopovický Kozel is quickly reacting to consumers demands, and therefore Kozel 11° marks the sharp rise in popularity among Czech beer lovers during the past couple of years. And its perfectly fine–tuned taste did not go unnoticed at many Czech and international competitions: