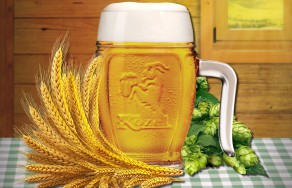 Outdoor grilling that is unthinkable without Velkopopovický Kozel is the symbol of this year’s Day of Kozel. One of the attractions is going to be a record-long kielbasa that will measure 187.4 metres, and that will be entered into Czech Book of Records. The kielbasa will be prepared by a master butcher; a true master of his craft. The most important ingredient in this creation is obviously beer, namely Velkopopovický Kozel 11°. The exact recipe for this grilled kielbasa will be available on May 16. It will be selected from three final original recipes, which will be evaluated by an expert jury together with faithful fans of Kozel beer directly in Velké Popovice brewery. The beer kielbasa will be then grilled by master grillers on the Day of Kozel on the longest grill in Czech Republic – 21.25 metres.

A rich music programme will be available to support the good mood. There will be more than 5 bands and singers, all lead by No Name band. Visitors will have a chance to see also Blue Effect with Radim Hladík, and Olympic Revival.

It is a tradition now that the Day of Kozel is also a celebration of honest hand crafting. Even the 21st annual celebration of Velké Popovice beer will be accompanied by shows of various crafts. Visitors will have a chance to test their handiness. Visitors will also have the opportunity to get to know the skills of Popovice brew masters as well as the history and present happenings of the brewery during tours that will be available to visitors for the entire day.

Come to Day of Kozel and reward yourself with freshly drafted Kozel and grilled specialties prepared with beer!