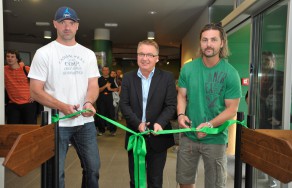 The „Nagano“ exhibit didn’t arrive in Nošovice by coincidence. Radegast was the partner of the Olympic team in 1998, and it was the bitter beer from Nošovice that helped celebrate the golden success. „I think everyone in Moravia is still proud of the fact that Radegast has been a part of such a huge success. It is in hockey even now as the official beer of the extra league and a partner of many Moravian clubs,“ said Vladimír Jurina, responsible for the Radegast presentation in Nagano. He now works as a PR manager for the Pilsner Urquell brands.

David Moravec was one of the few players who took part in the Olympic tournament and who came from the domestic extra league. „It was a huge surprise for me. During that season, I did really well but I would have never dreamed that I would see Nagano,“ a player from Vitkovice reflected after 15 years, who along with Jiří Dopita, his teammate from the “Nagano” team attack formation, opened the exhibition in Nošovice.

An extensive exhibition of photographs covers a substantial part of the Visitors Centre. „It’s the largest exhibition we have organised in the two and a half years the Centre has been open. We believe that both tourists and locals will find the exhibition showcasing the great success of the Czech ice hockey team attractive. Their trip to Nošovice can be enhanced by brewery tours and the Radegast beer tasting.“ This is an invitation to the new exhibition and tour of the brewery by Martina Sikorová, Head of the Visitors Centre.

The exhibition can be viewed for free from Monday to Saturday from 9 am to 6 pm and on Sunday from 9 am to noon. The brewery tour must be booked in advance by phone: 558 602 566 or through www.pivovar.radegast.cz