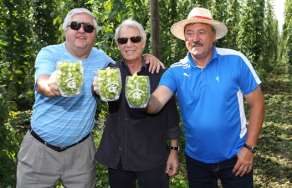 Pavel Zítek, marketing manager of the Gambrinus brand, also partook in the event. He opened the championship with these words:  „It is thanks to Czech hops, with a quality that is valued by the entire world, Czech beer has gotten its important name. The bitterness of our beers in comparison with those from abroad is the highest and that is for one reason – we use more hops. Czech beers have a full taste, they are rich, and for that you need more hops.“

After that, 23 contestants began their task of picking several dozens of hops and by doing so symbolically supported this year’s harvest, which is evaluated at 4,700.00 tons.

They handpicked hops for the last time 25 years ago in Přílepy, Rakovnicko region

At the beginning of the last century, 140 thousand pickers worked directly in the Zatec region during the harvest. They sometimes worked for 15 hours straight. The work hours were from „dawn to dusk.“ A harvest measurement was a 30 litre basket. Pickers usually filled eight to ten, though some of the more productive pickers filled fifteen.

During the second half of the century, this physically difficult work was replaced by machine work. „Hand picking of hops is a tradition that was part of Czech beer culture. It accentuates the importance of this raw material in the authenticity of Czech beer,“ explained Eva Kutílková, primary organiser of the seventh annual championship and a farm owner who has practised hops growing for many years. Adding: „I am glad that Gambrinus helped us to preserve this nice tradition. There would be no Czech beer without Czech hops.”

Zdeny Malafova’s commentary: „I’ve picked hops since my childhood. My personal record for a day is 27 baskets. I am proud of my victory since the competition was tough.“

Antonína Panenka’s commentary: „I’ve never gone to pick hops. I have enjoyed the championship very much. Josef Laufer, my friend Karolem Dobiáš, and I tried it for a short time, but I am not sure we would have lasted for hours as the contestants did. I am happy that Gambrinus supports not only soccer but this nice tradition as well.  Thus I can be sure that there are the right hops in Czech beer.“

Josef Laufer’s commentary: „I have not been at any hop field since the making of the movie. It has been 49 years now. I still remember the time and I am happy that the tradition is still alive.“