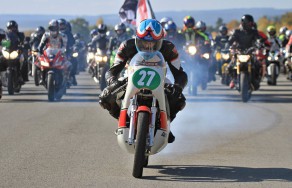 Vojtěch Staniš is a big motorcycle fan and he is also interested in its history. While thinking about the design of the helmet his inspiration came very quickly. František Šťastný is a very obvious inspiration for all motorcycle fans. “The helmet is in light blue in colour with the Czech tricolor in triangle shapes dominating the design. It is impossible to miss the number 1965 at the bottom of the helmet. This is the year of the very first Grand Pix Brno that was included into the calendar of the World Championship. It was a very important year for Czech motorcycle sports,” said Vojtěch Staniš, describing his helmet.

Vojtěch Staniš always admired the famous rider and he also met him as a little boy. “I am very proud of this meeting. Mr. Šťastný is an iconic figure of our motorcycle sport and he is well known around the world. He was a fighter and he never skipped a race. He fought even for 7th place as though he were fighting for a victory. At the top of his career, world class names were interested in him and with them he could have reached the World Champion title. However, he stayed loyal to his Czech Jawa,” said racer Vojtěch Staniš, as he proves his knowledge. He now races on more and more popular nature tracks.

Thanks to the Birell Helmet competition, now he can race his bike in a helmet reminding him of his big example. He received it from the hands of representatives of the Birell brand in Brno, where he took part in the Moto Show – Record event. The organisers have made two samples so everybody can have a chance to see the helmet.