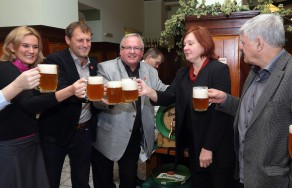 Michael Carbol from Zelinkovice took off for the Radegast brewery accompanied by his friends; it was his first time at the Nošovice brewery and he already received his reward. ”It was a big surprise. I am not a man who wins a lot. I will share the beer with my family and friends,” said a happy Michael Carbol, who was happy to get his gift certificate good for a glass half-litre stein, on which the brewery will have his name engraved.

The Visitors’ Centre is getting ready for the end of the year. “We usually experience an increase in the interest in tours but also in beer itself and other artifacts from the Radegast collection,” said director of Visitors’ Centre Martina Sikorová, who adds that this year, Radegast has prepared several novelties for hockey fans: “We have, for example, a set of 14 glass half-litre steins with a logo of one extra league club on each one of them. The same collection of pucks is available as well.”

The Visitors’ Centre is open every work day from 9 a.m. to 4 p.m. This will be the same for January and February. In 2013, the centre was closed due to technical reasons during those months. “Actual information about tours and store merchandise during the winter season is available to visitors at www.radegast.cz,” Martina Sikorová added.