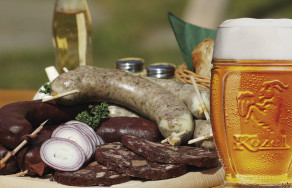 This year’s Ladovian Pig Fest offers not only a traditional pig slaughter feast but also an exceptional show of wood carving art on Saturday, March 15, from 10 a.m. to 3 p.m. The World Champion in wood cutting, Martin Komárek, will make a statue of a billy-goat, the mascot of the local brewery, right in front of the eyes of the audience. Visitors may look forward to displays of skills by master butchers, wood carvers, blacksmiths, and basket makers as well as the honest Velkopopovický Kozel beer.

Butchers will offers ham-on-bone, liverwurst, kielbasas, slaughter soup, jelly, cracklings, head cheese, boiled pork, Popovice pig-sticking goulash, sausage meatloaf, and many other specialties. The cutting of pork and sausages and black pudding filling will be performed by the Huder and Son Company and butcher Vitek. The aroma and flavour of pork dishes will be accompanied by bakery products from local producers and especially by Kozel beer. The organisers of the event are traditionally Velké Popovice brewery, the Town of Velké Popovice, and the Council of Mikroregion “Lada’s Region.”

A rich programme is prepared for guests in addition to the butchery shows. Visitors can take a tour of the brewery with a tasting of unfiltered Kozel beer and visit the live mascot goat Olda starting at 10 a.m. Teachers from the Elementary Music and Art School Velké Popovice will provide the musical programme. The Neurol Prague Band will supply rock and country music to listen or dance to.

“The climax of the programme will be the art show at 1 p.m. The World Champion in wood cutting, Martin Komárek, will then use a chainsaw to carve a statue of our billy-goat, the symbol of our brewery and of our beer. With this traditional event, Popovice brewery is reviving lovely Ladian poeticism, folk traditions, crafts, and especially fun and the festive pig-slaughter feast atmosphere that should be part of our pre-spring weekends forever,” said  Jaroslav Hacko, manager of Velké Popovice brewery, inviting all to join in the fun.

Art creations from students of the Elementary Music and Art School Velké Popovice will be also a part of the carnival celebrations. Visitors will have a chance to conclude their visit with a purchase of souvenirs and gifts in the original Billy-goat’s Gift Shop. Nearby, the restaurant “Kozlovna” will be open the whole day. Entrance to the event is free.

Velkopopovický Kozel is celebrating success in the prestigious competition Golden Cup Pivex – Beer of 2014, where it triumphed in several categories. Next to the grand prize “Champion” it won the special award of “Privilegium 11” in the category of 11 degree beers as well as first place among the light lagers.