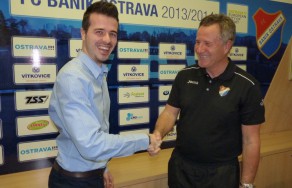 Baník Ostrava coach František Komňacký is facing a difficult task. During the last ten matches, he must win at last 14 points. Only then will he win the bet he made with Radomír Šlechta from Radegast, the official beer of the club, before the home match with AC Sparta Praha. If his team does not get the points, František Komňacký will have to serve Radegast beer to fans in one of the Ostrava pubs. If he wins, Radomír Šlechta will have to clean the locker rooms of the Ostrava A team.

“The goal of 14 points is very ambitious but it is not impossible and that is why I agreed to the bet. Our team should and is capable of getting those points,” said the coach of the FC Baník Ostrava František Komňacký and added that if he does lose the bet, he will have no problem fulfilling his part. “I will do what I promised. I will definitely consider employing some of the players.”

The bet of Baník’s coach with the representative of the Radegast brewery before the last third of the soccer completion is now a tradition. Last year, Baník got 7 points and the Baník players repaid the bet obligation.