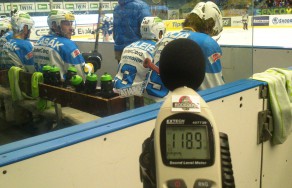 The loudest fans of this year’s extraleague playoffs are those of the HC Škoda Plzeň team. This is the result of measurements done by Radegast, the official beer of the hockey extraleague, which took place during the quarterfinals of the playoffs. The commissioner visited all eight stadiums and measured the volume of cheering during the entirety of each match. The highest number showed in Pilsen, where the needle stopped at 118.9 decibels during the home goal. Last year’s record for Vítkovice fans of 119.3 decibels was not conquered, but they will not lose their beer supply. Radegast will give 1,189 bitter beers to the loudest playoff fans. And other good new goes also to the fans of Kometa Brno and Sparta Praha, who beat the 118 decibels level. Radegast decided to reward them as well. 1,186 beers will go to Brno and 1,180 to Sparta. The measuring is not over yet. Fans will have the opportunity to show off during the final series.

The measurements took place at all stadiums that hosted the quarterfinals of the playoffs. The placement of the measuring device was always the same: the closest to the home bench. The results of the measurements reflect how players react to the cheering.

The device is on for the entire duration of the match and it is measuring without any interruption. It showed the highest level of 118.9 decibels in Pilsen during the first home goal during the second match against Kometa. More than 6,000 home fans cheered Tomáš Slovák’s aim at 9:22 in the match.

1,189 Radegast beers will go to Pilsen. “We will decide together with the representatives of the fan clubs and of the professional clubs how to distribute the beers among the fans. Fan clubs will also receive a certificate proving the fact that Pilsen fans are the loudest fans of the 2013/2014 extraleague season,” said Karel Kraus, manager of the Radegast brand, adding that the brewery will also reward the fans in second and third places: “We decided that we will reward all fans who conquered the level of 118 decibels because it is a very respectable performance. Besides Pilsen, we will also ship bitter Radegast to Brno and to Sparta Praha.”

The differences among fans in all stadiums were not that big. Kometa fans were behind Pilsen by only 0.3 decibels and Sparta’s supporters by only 0.9. An interesting fact is that the Sparta’s loudest moment was not during any goal but the collective cheering for the team.