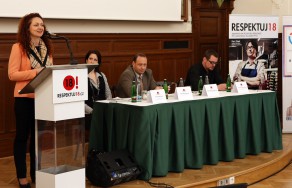 Under the auspices of the Mayor of the City of Pilsen, Martin Baxa, the conference “Respect 18,” a joint project of the City of Pilsen, Plzeňský Prazdroj, and the Centre for Drug Use Prevention and Therapy, took place in Plzeňský Prazdroj brewery on Thursday, March 27. The aim of the meeting was to evaluate the impact of the first year of the campaign in preventing underage alcohol consumption and sharing experiences with the representatives of other cities and regions.

The success of the campaign “Respect 18,” which was focused on the issue of underage alcohol consumption and especially the perception of this issue by the public, was confirmed by the results of a recent survey. 31 percent of Pilsen citizens, especially young people, remember the campaign after 6 months and 74 percent evaluate it as useful. Three quarters of respondents see today’s underage alcohol consumption as a problem. Overall, campaign respondents value its goals. The most effective communication took place in restaurants and public transportation.

“Our view of responsible alcohol consumption is clear and prevention of irresponsible consumption can be seen in all aspects of our society. As with experts, we see underage consumption of alcohol as a serious problem and we are taking concrete and effective steps to prevent that,” said Drahomíra Mandíková, Director of Corporate Relations and Communications of Pilsner Urquell, adding: “We pay attention to the strict internal rules that govern all our activities and all our communications not to offer our products and services to the underage population. “Respect 18” definitely belongs with the responsible projects of Plzeňský Prazdroj and we would like to hand over our experience to the widest possible range of engaged parties and other municipalities.”

The campaign against tolerating underage drinking is aimed at the adult public and especially employees in restaurants, bars, and stores. The project started on June 1, 2013, using the public transportation communication systems, TV spots, and other media. Real people appeared in the spots and visual messages. They were known Pilsen personalities, pub owners, and store clerks who expressed their opinions on the issue during the July outdoor exposition in the centre of Pilsen. “The alcohol consumption of Czech youth has for a long time been the highest in Europe, and from the surveys we know that if children start consuming alcohol too soon the risk of any kind addiction is much higher. I applaud the efforts of beer brewing industry leaders who understand the risks connected with alcohol consumption and are looking for concrete ways to bring public attention to it and to positively influence end distributors especially. I push for government influence in this matter via legal actions as well as via public dialog on this issue,” added National Drug Use Prevention Coordinator Jindřich Vobořil.

“The success of the campaign is reflected also in the fact that the sheriff’s department checked 170 establishments during the evening and night hour operations and in five instances secured 13 underage children under the influence of alcohol. We will continue with these efforts as well,” mentioned Robert Houdek, safety councilman of the city council of the City of Pilsen.

“We are pleased with the number of people who remember the main message of the campaign and especially with those who took it to their hearts. We are convinced that it is the behaviour of our adult population and their use of alcohol that decides how our children will benefit from our efforts to protect their health and lives,” added Petr Hrouzek, Director of the Centre for Drug Prevention and Therapy, civic association Plzeň.

To get more information about the campaign and to view the useful rules for restaurant establishments and storeowners use the special website of Plzeňský Prazdroj www.respektuj18.cz. The website also contains interesting facts about alcohol and its influence on the human organism.

*The survey was performed by NMS Market Research comp. on the select sample of 329 subjects from adult population of city Pilsen in February 2014.