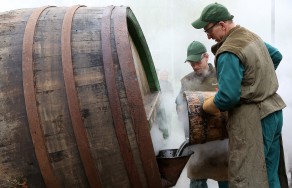 Rolling out of the cellars and pitching of wooden oak barrels and tubs meant for fermenting and maturing of Pilsen beer in brewery’s cellars is traditionally a duty of the cooper’s team. “Coopers significantly help preserve the traditional way of making Pilsner Urquell beer. Pilsen beer in small quantities ferments in oak tubs and matures in historic cellars of the brewery under the exactly same conditions as it did nearly 172 years ago. It is served to master brewers for sensory and taste evaluation of the beer and its comparison with the beer made by modern technologies,” said Václav Berka, senior marketing master brewer of Plzeňský Prazdroj.

“Not only current but also the retired master brewers come regularly to check the Pilsner lager from wooden barrels. In addition, visitors too may test it too in the authentic atmosphere of historic cellars,” added Jindřiška Eliášková, head of historical heritage preservation and tourism development in Pilsner Urquell.The regular maintenance of the oak barrels and tubs, changing of wood, cleaning and pitching, cleaning of tubs, any and all manipulation with the barrels, and, naturally, making of new lager barrels is one of the spring and fall activities of the company’s coopers team.

Resin is the basic raw material for making of brewer’s pitch. It comes for evergreens, mainly pines. Chines, Canadian, and American resin is used. Brewer’s pitch is made by slow cooking of various kinds of resin for about 4 hours. The pitch reaches 200° C during that time.

Hand pitching of lager barrels starts with cleaning of the old pitch by melting it. After that, the barrels of about 50 hl are filled with about 40 litres of 200° C hot new pitch, the barrels is rolled to assure entrance of the pitch too all openings. Excess liquid is drained and the pitch is left to dry during 10 minutes of constant rolling of the barrel to make sure that it stays evenly distributed. Pitch must not leave any aftertaste on beer.

The fact that Pilsen coopers’ craft is a world-renowned rarity is supported by the visit of young French coopers who came to learn cooperage there for two weeks last July.

The uniqueness of the preserved craft in Pilsen is also supported by the award “Bearers of Folklore Heritage” awarded by the Ministry of Culture for the exceptional care for the ancient crafts and received in the name of the entire cooper’s team by Josef Hrůza in September 2012.