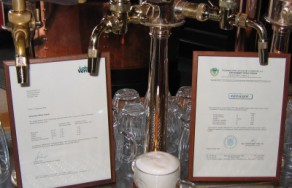 Pilsner Urquell has, according to the analyses performed by renowned laboratories, the same characteristics that it had in 1897. This confirmed what the Pilsner Urquell brewmasters have been saying for a long time. The modern brewing procedures preserve and guarantee the traditional taste of Pilsner Urquell beer. The results have been brought by the laboratory of the Research Institute of Brewing and Malting and by the Swiss laboratory Labor Veritas in Zurich after they compared the results of current analyses with those from 1897.

In the Pilsner Urquell archive they have recently uncovered the results of an analysis performed by the Chemical Research Institute in Pilsen (Lučební výzkumný ústav) and a chemical laboratory in St. Gallen in 1897. The Research Institute of Brewing and Malting has been performing this analysis for the past 15 years and now it has also been carried out by the Swiss laboratory Labor Veritas in Zurich. The results have shown that Pilsner Urquell beer from 1897 and 2008 has practically the same values and quality.

Pilsner Urquell beer gained its global reputation thanks to its taste, clarity and golden colour, which was not known in other beers until then. The Pilsen brewmasters have been keeping this tradition for more than 166 years and they have also been trying to keep the consistent taste of their beer. To this day they compare the taste of beer brewed in the modern brewery with the samples from the period beer museum where the beer is aged in old lager casks. “We have had the results of the Pilsner Urquell analysis from 1897 – when the Pilsen brewery was already the second largest in the Austro-Hungarian Empire, exported beer to many European countries and also to the US and a year later it registered the Pilsner Urquell trademark – compared with the current samples from 2008. The results show us that the beer has the same characteristics as it had then,” says Václav Berka, Senior Sales Brewmaster at Pilsner Urquell.

What makes the taste of the Pilsner Urquell beer unique?
The uniqueness of the full taste comes most of all from the real extract whose value reaches 5%, while other Czech lagers have between 3.8 – 4.3% and foreign lagers only 3 – 3.8%. The fullness of the Pilsner Urquell beer taste also comes from the high degree of fine bitterness, achieved by the use of the best quality Czech hops. Bitterness measured in BU (bitterness units) reaches in Pilsner Urquell beer 39 units while other Czech lagers average approximately 30 units and foreign approximately 20 units.
Thanks to the lower level of real degree of fermentation higher fullness of taste can be achieved. The degree of fermentation in common Czech 12º beers is approximately 65% and in foreign beers even more than 70%.