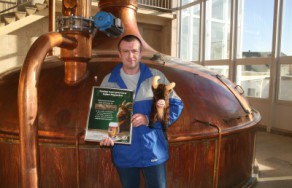 Gambrinus, the long-term best seller on the Czech market, is introducing a new taste to satisfy the pallet of the Czech beer lovers and is expanding its portfolio with Gambrinus 11° Excelent. Compared to the other 11º beers on the market, it has fuller taste originating from the added caramel malt and most of all it has a unique dosage of hops.

“Gambrinus carefully preserves its longterm tradition but even here the time is ripe for innovation. Now we want to satisfy the pallet of many of our consumers, who are increasingly looking for fuller Czech beers and we are expanding our portfolio by introducing Gambrinus 11° Excelent,” says Jiří Rákosník, Gambrinus Brand Manager.

Gambrinus 11° is an exceptional 11º beer. “The double mashing brewing process, typical for Gambrinus and the majority of Pilsner type beers, was enriched by our brewmasters, after a year of testing and searching for the optimum choice of malt barley, who added some caramel malt and most importantly some unique dosing of their hops. The secret is in adding a third dose of hops after the completion of the hop boiling at the very end of the boiling process. This brings a fuller taste, together with more intense hop aroma,” adds Jan Hlaváček, Head Brewmaster at Gambrinus, who comes from a long family tradition of Pilsen brewmasters.

Much like the other beers of the Gambrinus Brand, Gambrinus (10º) and Gambrinus Premium (12º), Gambrinus 11º Excellent is also made by the traditional brewing procedure with separated main fermentation and aging. Gambrinus is brewed from only three natural brewing ingredients (barley malt, hops and water) and like all Gambrinus Brand products this beer also fulfils the conditions for the use of the protected Czech Beer label.

The name Excelent was chosen for the new Pilsen 11º by the consumers themselves in an Internet opinion poll last August. The name was originally dedicated to the premium beer Gambrinus 13º, which was served in Pilsen during the celebration of the Gambrinus Day. The successful proposal in the end won and became the name of the new 11º beer.

Gambrinus 11° Excelent is a beer for a wider group of consumers suitable for many different occasions. Like the other members of the Gambrinus family it is also very drinkable and every sip brings on the desire for another. It will be introduced into the sales network in the second week of November. The price of the packaged beer will be approximately CZK 11 per bottle.