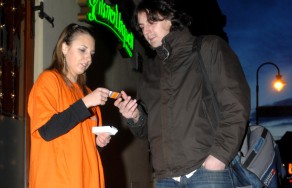 Czech beer has been sold in Armenia since before 1989 and Pilsner Urquell is a very well-established brand there. Sales of Plzeňský Prazdroj beer on the Armenian market have been growing since 2004, when SAB Miller's daughter company SHANTAN LTD. began managing its distribution. Armenia has 3.2 million inhabitants who annually consume an impressive 400,000 half-litres of Czech beer.  Average annual per capita consumption is 5 litres.

Pilsner Urquell in particular is perceived as a super-premium product and is available in upscale restaurants while Kozel is perceived as a quality Czech beverage and is favoured especially among young legal age consumers. Kozel's success is strongly supported by its popularity in Russia. Owing to Armenia's pro-Russian orientation, whatever is popular in Russia (Kozel is the best-selling Czech beer in Russia) is usually successful in Armenia as well. Transporting beer to Armenia is problematic because it must be transported through Georgia, where political stability and security is an issue.

Pilsner House, the best pub in Armenia
Distributor SHANTAN LTD. regularly evaluates the best pubs in the National Quality League. The flagship restaurant in Armenia is Pilsner House, where both beers are available on tap. A speciality of this establishment is roasted crayfish from Lake Sevan, which is particularly delicious when paired with Pilsner Urquell. High quality beer is also available in the summer in many cafés in downtown Yerevan.