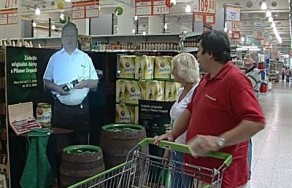 The projection on a special Vikuity film from 3M is a relatively new tool, and for the first time ever in the Czech Republic it is used to present the brand through a projection of a figure communicating with the environment. From the angle of 180°, it looks as if the commercial brewmaster Václav Berka stands right in the store and speaks to the passers-by. “We wondered how to remind people of our main communication concept that the real wealth is hidden inside. This time we chose the technology of a so-called 2D figure that makes it appear as if our brewmaster stood right in the store and talked about his great beer directly to the customers,” says Karel Kraus, Pilsner Urquell brand manager.

The special technology facilitates a rear projection of moving images on a special film containing glass beads that makes people feel like there’s a living person in front of them. The image needs to be projected in a mere 20° sector, so the image is undistorted even in strong light. “This is a premium presentation of the Pilsner Urquell beer. We want to highlight the uniqueness of our brand on the Czech market through an extraordinary POSM that has never been used in the Czech Republic in this manner. We believe that people will enjoy not only the style of the presentation, which is still unique in Czech Republic, but also the content of the short video, because Václav Berka can talk really engagingly about beer,” adds Vladimír Jurina, manager of Plzeňský Prazdroj brands. The campaign will have two stages, one for each of the holiday months. Each part is ca. a one-minute loop.

*VÁCLAV BERKA (52) has dedicated his life to the Plzeň brewery. He brewed the first batch of beer 37 years ago during a summer job at the age of 15. He started in the brewery as an engineer, graduated from a high school of chemical technology and ICT in Prague. He successively went through the positions of cellarman, brewmaster, Gambrinus brewery director, Plzeňský Prazdroj chief brewmaster and brewery manager in Plzeň. For the past 12 years, he has been a Prazdroj trustee and a member of the board of the Czech Beer and Malt Association. In the capacity as a commercial brewmaster, he travels around the Czech Republic and the entire world and presents the history, production, taste qualities and proper care for the pilsner beer, and especially Pilsner Urquell.