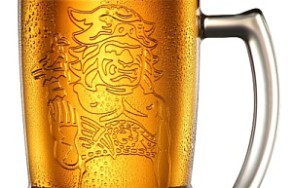 New glasses for the most favorite beer in Moravia will be presented on the market in the form of a traditional half-liter beer glass, which will be accompanied by a smaller glass.  According to the manager of the Radegast brand, Pavel Kmínek, the main purpose of the glass design is thus: “The dominant feature on the new glass is the symbol of the brand, which is a pagan God Radegast, who represents masculinity and strong character. It is the real glass for real beer for real men.”

The author of the Radegast beer glass design is a respected Czech designer Jan Čapek*, who has been awarded numerous Czech and international awards. “The idea for the profile of the glass has to come from the brand and, of course, it has to be distinguishable from others. When working on the design, I thought about the fact that Radegast beer connects Moravian nature and real masculinity. That is why I could not use minimalistic design with severe lines. I wanted the glass to reflect a pagan atmosphere, which is perfectly represented by God Radegast,” explains the designer.

“The new glasses fully describe the profile of the Radegast beer, respecting its tradition and look. Innovative solutions in production resulted in improvement of ergonomic characteristics of the new glasses. The new half-liters will better accentuate all taste characteristics of the Radegast beer. We are glad that even pub owners evaluate the glasses positively, because first impressions are very important,” business brewer Zdeněk Baszczynski.

The new series will continuously replace the existing series in all pubs and restaurants, where Radegast is served from the tap. Gradually, a half a million beer half-liters and smaller glasses will make their way onto the market. The existing glasses will not disappear from establishments right away out of respect for their nature. These will be used in restaurants and pubs until the end of their life. But we guess that the majority of glasses in establishments should be new within the year.

*Information about Jan Čapek, author of the new glass design
Jan Čapek studied at the arts school in Turnovo, where he majored in cutting and graving of precious stones. After that he continued his studies at the Academy of Arts, Architecture and Design in Prague specializing in Metals and Jewelry, and in Jewelry design. In the mean time, he studied ceramics and porcelain at the Faculty of Art and Design at the Jan Evangelisty Purkyně University in Ústí nad Labem and one year of industrial design at the Hallam University in Sheffield, England. Already during his studies, the talented designer took part in a two- year internship in New York, where he worked in a stone cutting workshop of precious stones, Stastny Lapidary, for brands such as Tiffany & Co. or Harry Winston. Other successes followed: 1st place in a student competition of design at the SIBO fair in cooperation with the Designcentrum of the Czech Republic (2000), finalist at the international competition of Gas de France / Jeunes Flammes in Paris (2003), 1st place in the Czecho-Slovak round of the Electrolux Design Lab competition – Prague (2004) and a year later 2nd place at the world finale in New York (2005), he was awarded Designer of the year in the Best of DolceVita competition(2004 and 2005), prize for Selected Excellent Design in the finale of the world Charmant International Design Competition in Japan (2006), and lastly  2nd and 3rd place in the Czech Grand Design competition in 2006 and 2007 respectively, and nominated this year, 2008. Among the most valuable and most famous objects by Jan Čapek that are recognized by the general public is the design of PET bottles for Karlovarské minerální vody (mineral water). Furthermore, chairs “Clean Mesh” and “Polygon” or the “Washman” brand for Elektrolux. One of the last “offences” by Čapek is the design of half- liter and small glasses for the most sold Moravian beer, Radegast.