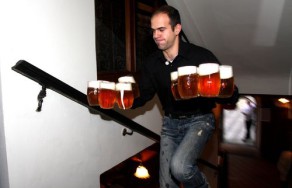 The celebrations will start at the U Pinkasů restaurant in Prague. Unfiltered Pilsner beer will be festively opened from a little wooden barrel. And then there will be an untraditional race – running from the basement up the stairs to the second floor while holding ten half–litre glasses with beer.

There will be nearly 60 pubs and restaurants in Prague tapping the unfiltered Pilsner Urquell, e.g. U Pinkasů, Kolkovna, Celnice, Bredovský dvůr, Malostranská beseda, u Vejvodů, Konvikt, U Houbaře, Kobyla, Sokolovna, Na Pláni, Kulaťák, U Bansethů and others (the full list can be found in the attachment). Barrels with unfiltered Pilsner arrived to the alehouses already on Monday so the beer can take a one-day rest before the barrel opening. „We consider the celebrations of the first Pilsner Urquell batch in our restaurant absolutely crucial and natural – just here the beer has been tapped continuously since 1843,“ says the U Pinkasů manager František Novotný.

The celebrations will start on October 5th at 3:00 p.m. at U Pinkasů where the brewer senior of Plzeňský Prazdroj, Václav Berka, will open the little wooden Pilsner Urquell barrel.

At U Pinkasů, there will also be another part of the Pilsner Urquell birthday party, and that will be, held for the first time, „Pinkas’ Nightmare“ – a 45–step run from the U Pinkasů basement holding 10 half–litre glasses full of beer. The race will start at 4:00 p.m. And the reason for this race?
Jakub Pinkas, the founder of the restaurant, was originally a tailor so he wasn’t tied down by any of the gastronomic stereotypes of that time, such as serving beer by pouring from larger pitchers on the table. So that’s why Pinkas, since the beginning, served beer directly in half–litre glasses which he would fill from the barrels in the basement and bring out to the guests. By making this change, Pinkas significantly increased the quality of the served beer. On the other hand, that required endlessly running upstairs and downstairs, which at U Pinkasů lasted for many years and became a “nightmare” of the staff because by the end of their shift, they were exhausted.

Unfiltered beer is very popular at special occasions. Beer lovers can taste it for example at the annual Pilsner Fest. „Unfiltered beer is cooked the same way as commonly sold beer but the difference is that at the end of the production process it doesn’t go through filtration and pasteurization. That way the yeast stays inside and the beer has a fuller taste and includes even more vitamins, but it must be consumed soon after being tapped so it is not very suitable for a regular sale,“ says senior brewer of Plzeňský Prazdroj, Václav Berka.

Notes to editors:
First Pilsner Urquell batch is related to 1842 when on October 5th brewer Josef Groll in the Měšťan Brewery combined the Bavarian bottom-fermenting method with local exquisite ingredients: a special kind of barley, Žatec hops and local soft water. It resulted in a unique tasting beverage of clear and golden–like color which was unknown until that time. Pilsner Urquell is being cooked according to the original recipe until this day – the same cooking process with three mashes with a direct heating of the mashing pan. Pilsner lager beer started a whole category of Pils-like beers which today constitutes 70 % of all beer consumed in the world.