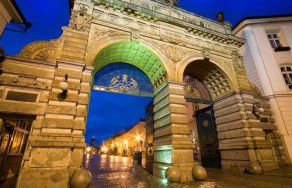 „The increasing popularity of Prazdroj as a tourist destination was mainly boosted by the interest of domestic visitors, a fact we appreciate the most. Like last year, we were able to offer them some new attractions, and on top of that we had the advantage of a 2010 trend where Czechs and Moravians stayed home for vacations and were looking for domestic touring destinations. The opening of the second Plzeň brewery, Gambrinus, to the public played a major role with domestic beer consumers,“ commented Tomáš Raboch from the Plzeňský Prazdroj brewery’s department of tourism.

The portion of Czechs as a total number of visitors makes up nearly half of the grand total. Germans remained in second place, with 5% more coming in 2010 than the previous year. The 43,000 visitors from Germany represent almost 20% of all visitors, a big portion. Pilsner Urquell is also traditionally popular in Taiwan, with 10,000 visitors coming from there.

„Taiwanese visitors held their third-place position and their number increased by 38%. On the other hand, Australians, Bulgarians, and Mexicans, typically small groups of visitors, started to visit in higher numbers thanks to our active participation in international tourism fairs and our cooperation with the Czech Tourism Agency. The visitor-rate increase during the last year was also supported by group tourism activities, while the short-term decrease in 2009 was the result of a global plunge in tourism in general,“ added Tomáš Raboch.

Plzeň brewery has also traditionally offered conference rooms to be used for organising various events and parties. Conference Centre Secese was used by many more organisations and firms in comparison with the previous year. The brewery received a huge amount of interest in the organisation of conferences, meetings, parties, and even private events, especially during the fall and winter seasons.

Among the novelties of the past year we can mention especially the new sightseeing tour at Gambrinus, which includes not only brewing spaces such as the cooking and filling rooms but also the interactive “Gambrinus Arena” and school of beer tapping, which was fully open to the public in August as a part of the Pilsner Fest. The gift shop in the brewery’s courtyard also recorded an increase in sales. During the last year, the gift shop underwent a major interior reconstruction and now offers a wider range of beer-related items.

Notes for the editors