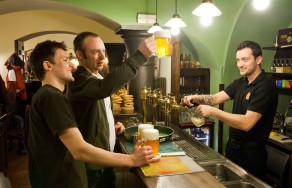 “Throughout whole year consumers have been facing uncertainty and economic pressures. The 33% excise tax increase on beer in combination with lower disposable income resulted in weakened consumption. Last year sales were also adversely impacted by lower on-trade traffic and the overall soft performance of draught beer in pubs and restaurants, which was further deepened by lower tourism. Despite this, share of our super-premium portfolio with flagship brand Pilsner Urquell grew. On international markets, we have managed to tackle the adverse situation and grew our exports year-on-year. “

Following a high growth two years ago, the 11-degree segment has continued to enjoy popularity, despite the overall market decline. The ‘elevens’ reported a moderate growth of 1%, underpinning the stable trend of premium beers. Mainstream brands sales were down mainly as a result of softening consumer demand in the on-premise channel.

Plzeňský Prazdroj launched a number of novelties last year, such as Master 15° Gold or Birell Semi-Dark. In packaging innovations, the Master special beer range gained much interest and generated a double-digit percentage growth in sales, also thanks to the bottle variants. The malt drink Frisco achieved a high growth in sales as well and the non-alcoholic beer Birell recorded a solid single digit growth. As an attraction for pub and restaurant visitors, the offer of beers on tap has been enhanced by seasonal unfiltered variants of the traditional Czech beers Pilsner Urquell, Gambrinus, and Radegast.

In the upcoming year 2011 Plzensky Prazdroj will develop activities to contribute to the stabilization of the beer market and further development of Czech beer culture.

*Estimate by the Czech Beer and Malt Association