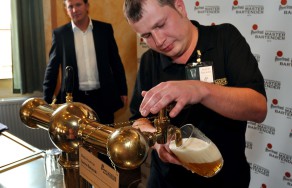 The modernisation of the cooling equipment influences the cooling in the filtration process, warehousing of hops and historical cellars. With the new technology, the beer is cooled to 3°C before it is poured into bottles or cans after it’s pasteurised through the flow pasteuriser. This way, Prazdroj does not use the R22 coolant, which requires a lot of energy, for ecological liquidation. The amount of ammonia was lowered both in the cooling system and in the system of beer cooling. This system requires less energy.

The investment also represents a  contribution towards safety. The distribution channels for the ammonia were taken down from bridge construction in the brewery and also from historical cellars. These are part of the sight-seeing tour. Brewers from Prazdroj also test here the quality and taste of the beer, which even today ferments and ripens in oak barrels, just as it was done in the 19th century.

Positive environmental impact is also found in the dramatic decrease in energy consumption of the new system. Modernisation brings considerable savings in electric energy and the entire system is a lot more environmentally friendly.

The majority of technical equipment is under the continuous supervision of the central operating system, with 24–hour supervision by the staff.