The history of Pilsner Urquell:
the story we cherish!

One of the oldest buildings on the grounds of the Pilsen brewery is a two-storey building from the 1860s. There, we have our own archive, accredited by the Ministry of the Interior. It is one of only eleven accredited private archives in the Czech Republic. It comprises 116 collections consisting of 515 metres of archival records and 225 metres of a technical archive. It is accessible for researchers upon prior agreement.

55
hectares
Area of the Pilsen brewery we responsibly take care of.

Presently, our archive is being digitalised. So far, a special book scanner has digitalised over 130 books and plans. This will make our history available to future generations in digital form as well. We continuously update and expand the archival collections to keep the history of our company alive”.

We also own and maintain the Brewery Museum in Pilsen, which was opened in 1958. In this place, which features a unique atmosphere, the origins and development of the brewing industry and brewing related crafts are captured and presented. It is located in a medieval building, endowed in its time with brewing rights, and its depositories host an extensive collection of beer drinkware and container glass, beer bottle labels, beermats, and beer-related art, as well as a number of brewery curiosities and many other things.

However, in today’s digital era, we believe it is also important to present the history and key milestones related to our brewery and Pilsner beer in modern and innovative ways. Every year, we design a range of different formats through which the public may learn about us and the broader history of brewing in the entire region. One example is an online series we created in 2017, characteristically entitled “The Stories of Golden Lager”. We also organised a roadshow which visited 40 places around the Czech Republic to commemorate the 175th anniversary of the first brew of Pilsner Urquell.

The most visited monument in West Bohemia? The Pilsen brewery!

The numbers of visitors to our breweries in 2017

If your brewery is located right on the edge of a city centre, you can’t just see it as an industrial building. Add a famous brand and you have two good reasons for feeling exceptional responsibility for the shape of the site where the beer is brewed.

Investing in historical buildings is an important part of the company’s long-term investment activities. We have gradually renovated the courtyard of the Pilsen brewery – which has become a part of the “public space” and public life in Pilsen –as well as a number of the adjacent historical buildings. The latest renovation focused on the upper area of the courtyard next to the Secese conference centre. For this year, we have scheduled the reconstruction of the timbered Formanka building and, most importantly, of the world-famous entrance gate, the so-called Jubilee Gate from 1892, which is also a cultural heritage monument. Most of the important buildings that we own, as well as the brewery courtyard, are open to the public throughout the year.

Thanks to our care, the Pilsen brewery has become the most visited tourist destination of the region and one of the 15 most visited in the entire country. In 2017, a record-breaking number of 762 thousand visitors walked through its gates – most of them Czechs, with about 40% being foreigners.

Although the other two breweries owned by Plzeňský Prazdroj are not as large as the site in Pilsen, we maintain them with no less passion and they are definitely worth a visit.  At the Velké Popovice brewery, visitors will find renovated Gothic Revival buildings (opened to the public in 2010). Nošovice, the newest of the three locations, is home to the Radegast brewery, which is now, despite being founded in the late 1960s, the second largest in the Czech Republic. 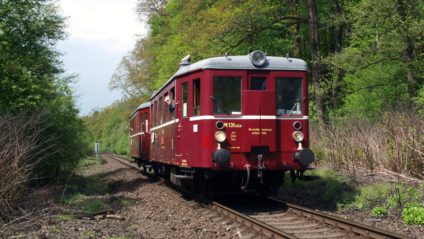 Beer and trains go well together. There is nothing better than visiting a brewery without a car. Apart from being environmentally-friendly, you can feel free to enjoy a beverage which tastes best where it actually originated. This is why we have financially supported special trains running from Ostrava to the Nošovice brewery as part of the charity program Radegast lidem (Radegast to the People) over the last two years (see the section Supporting the Regions for details). Each train ticket also counts as an entrance ticket to the brewery and the Radegast Draft Beer Workshop. The trains are run by Slezský železniční spolek (the Silesian Railway Society). Last year was the first time they ran their red diesel railcar (this type was manufactured from the 1960s to the 1980s), which they sent nine times. 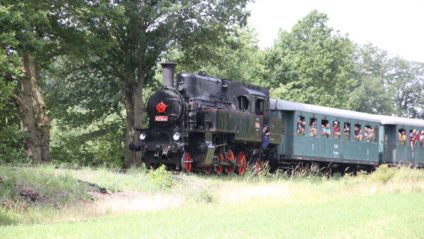 How about getting off the train right at the brewery – a historical and beautiful one? Thanks to Czech Railways and Plzeňský Prazdroj, you have the opportunity to enjoy a train journey from Prague to Velké Popovice from spring of 2018. In order to make it possible for the train to come as far as the beautiful historical brewery, we had to have the local historical railway siding repaired. We funded the repair ourselves.

The construction of this picturesque brewery in the heart of painter Josef Lada’s region was started in 1871 by Baron Franz Ringhoffer. The railway siding from the Strančice station was built at the beginning of the 20th century. In its time, it was used for transporting raw material. More recently, there have only been several nostalgic steam train rides. Now, it is to serve as a passenger transport line.

There’s no other place
to serve your brewery cooper apprenticeship 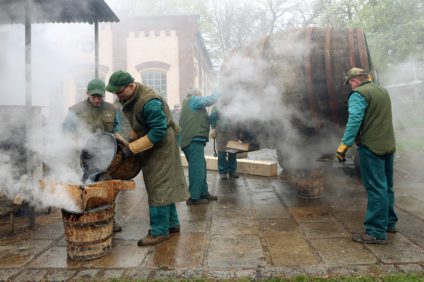 The only place in the Czech Republic where you can become a brewery cooper is the Pilsen brewery. Most likely, it is the only brewery in Europe where this craft is still being kept alive.

The present cooper team consists of eight people. Whenever one of them is about to retire, we announce a selection of candidates for a new apprenticeship in advance. It takes several years of practical training in the brewery for the cooper to acquire the necessary skills. These include the knowledge that the wood for the barrels must be oak, as it grows slowly and thus has thick growth rings. Oaks like these can be found, for example, in the local Křivoklát region.

Coopers contribute to the attractiveness of the historical brewery tour, which offers the chance to see 120 giant barrels (with a capacity of about 40 hectolitres) in its cellars. You can also take home small, handmade wooden barrels of various sizes, which cannot be found elsewhere in Europe.

Why are the original barrels  used today? A small part of Pilsner Urquell beer is still matured in traditional oak barrels so that it may be compared with the beer made using modern equipment. In this way, the brewers guarantee that the quality of the beer is as great as it was 175 years ago.

Pilsner Urquell respects tradition. Therefore, it is trying to get cooperage included on the UNESCO’s World Cultural Heritage List. This year, we made another important step along this path by sending an official nomination of the craft for its inclusion on the list of intangible cultural heritage of Czech traditional folk culture.

The barrels are drawn by horses,
just like back in the day 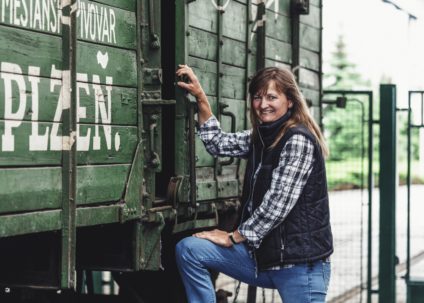 Do you want to see brewery horses pulling a wagon with barrels? You don’t have to watch a historical movie being filmed. You can see it in the streets of Pilsen or the Pilsen brewery courtyard. And sometimes in other cities, too. On the occasion of the 175th anniversary of brewing the first batch of Pilsner Urquell, wagoner Jana Šůsová went with her horses to Prague’s famous pub U Pinkasů, or as far as Olomouc.

Pilsner Urquell enjoys an exceptional position on the market, not only due to its quality, but also to its tradition. This is why we see supporting traditions related to brewing as a matter of course. Pilsen beer has been distributed by horse-drawn carriages since its foundation. As late as 1957, horse-drawn wagons drove about the brewery premises. In 1990, the wagoning tradition was restored by Jan Šůs. Thanks to that, the horses, the decorated wagon, and the barrels may be seen in today’s streets. Without the many years of  Plzeňský Prazdroj’s financial as well as non-financial support, horse wagoning would hardly survive. It is one of our gifts to the city of Pilsen, as seeing horses carrying a load in the streets is unique as well as beautiful.

The present wagoner, Jana Šůsová, who took over the trade from her father Jan, regularly delivers beer every week around Pilsen with her two mares Barna and Bajka. The former gave birth to a foal (Bret) last year. The future has thus been taken care of.

Hundreds of thousands of tourists visit cellars which contain barrels full of beer! 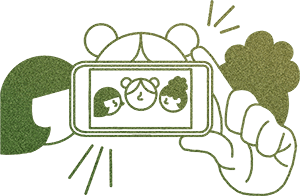 See how beer is made with your own eyes. Learn about the technological process. Touch history and feel emotions in the cellars. And, at the end, taste a lager fermented in an open vat and matured in oak barrels. All this is offered to visitors who take the Pilsner Urquell Tour of the  brewery. Opened in 2007 and 2008, the tour was taken by more than 200 thousand visitors last year.

Along the way, everybody gets to see the brewhouse that was still in use at the beginning of this millennium, as well as its ‘successor’, which is used now. Visitors are shown the packaging hall, several films on the production process, and, most importantly, the fascinating historical cellars with giant barrels. The beer maturing in some of them is offered to visitors to taste, poured directly from the barrel into the glass, forced out of the barrel by nothing but gravity.

In 2017, we opened a new shop at the end of the tour and resumed tours of the Gambrinus brewery. There, visitors walk directly under the cylindrical-conical tanks where the beer matures. And, of course, they can taste the unfiltered variant of Gambrinus beer.

Our brewery in Velké Popovice, was opened for tours in 2010. You will see the entire production process and the beautiful Gothic Revival premises, enjoy the unfiltered beer and meet the mascot of the brand – Olda the Goat and his successors.

The Radegast brewery in Nošovice is a modern enterprise which may not boast historical beauty, yet its tower offers a wonderful view of the Beskydy mountain range as well as a popular beer tasting hall. As of recently, visitors will also get to see the lager cellars and can take part in the Radegast Draft Beer Workshop.

By designing and opening visitor tours, we help keep the brewing history alive. This is also our service to those who want to know how this national drink is made. Therefore, we plan on keeping our breweries open to the public and continuously restoring the valuable historical buildings, and, most importantly, the stories and craftsmanship of the people behind them.