The history of Pilsner Urquell: a story we cherish!

740
meters
of archival materials and technical archives in our collection

The history of Pilsner Urquell beer, which has become synonymous with bottom-fermented lagers, commits us to look after our historical buildings, collections, and information sources.  One of the oldest buildings on the grounds of Plzeňský Prazdroj is a two-storey building from the 1860s, which houses our own archive, accredited by the Ministry of the Interior.  It is one of only eleven accredited private archives in the Czech Republic. It comprises 116 collections consisting of 515 metres of archival records and 225 metres of technical archives.  It is accessible to researchers upon prior agreement.

Our archive is currently being digitalised. So far, a special book scanner has digitalised over 300 books and plans.  This will make our history available to future generations in digital form as well.  We continuously update and expand the archival collections to keep the history of our company “alive”.

We also own and maintain the Brewery Museum in Pilsen, which was opened in 1958. In this place, which features a unique atmosphere, the origins and development of the brewing industry and brewing related crafts are captured and presented. It is located in a medieval building, endowed at its time with brewing rights, and its depositories contain an extensive collection of vessels used to drink beer and container glass, beer bottle labels, beermats, and beer-related art, as well as a number of brewery curiosities and many other things.

The courtyard of the Brewery Museum has an entrance to the historic underground of the city of Pilsen. Managed by Plzeňský Prazdroj since 2009, the underground is one of the major tourist attractions of Pilsen. The Pilsen underground is composed of a large system of corridors under the historic centre of the city. With one and in some places even two levels, the total length of the underground corridors is 13 kilometres. The underground was built at the time of the first burgher houses immediately after the founding of the town, i.e. beginning in the late 13th century, and was originally used for food storage, later for lagering and maturing beer.

In 2018, in cooperation with the City of Pilsen, we prepared for public access a new part of the historic city underground under Rooseveltova Street at a length of 134 metres.

Visitors could already see the new section of underground corridors in early 2019, but only in torchlight! 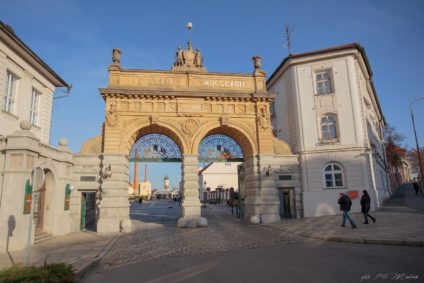 Investing in historical buildings is an important part of the company’s long-term investment activities.  We have gradually renovated the courtyard of Plzeňský Prazdroj, which has become a part of the “public space” and public life in Pilsen, and the “Formanka” building. In the jubilee year 2018 we also restored the “Jubilee Gate” from 1892, a symbol of our brewery as well as a historical monument.

During the restoration, representatives of Plzeňský Prazdroj and the Pilsen Diocese placed a special box in the gate with documents for future generations and information about the current happenings in the brewery and important milestones of 2018. The box includes documents describing activities through which the brewery joined the celebrations of the country’s 100th anniversary, such as the auction bottle of Pilsner Urquell, the special První Lager (First Lager) we brewed with Matuška Brewery to celebrate the anniversary of the First Republic, and the exhibition called Prazdroj 100 years Ago and Today. There are also photographs showing the restoration progress of the Jubilee Gate.

Most of the important buildings that we own, as well as the brewery courtyard, are open to the public throughout the year. Thanks to our care, Plzeňský Prazdroj has become the most visited tourist destination in the region.

Although the other two breweries owned by Plzeňský Prazdroj are not as large as the site in Pilsen, we maintain them with no less passion, and they are definitely worth a visit.

In Velké Popovice, visitors will find a picturesque brewery in the heart of the region popularised by artist Josef Lada. Construction began in 1871 by Baron František Ringhofer.  Since July 2018, visitors can also reach the brewery by a regular train connection from the main railway station in Prague. For the brewery, the renewed siding has a double importance – in addition to the comfortable transportation of visitors from the centre of Prague, there is also the possibility to transport beer by railway again.

Despite opening as late as 1970, Radegast Brewery in Nošovice is now the second largest in the Czech Republic. The brewery is situated in a modern building, and while it perhaps lacks historic beauty, it offers a tower with beautiful vistas of the Beskydy Mountains and a popular tasting hall. Visitors can now also visit the lager cellars or try the Radegast Draft Beer Workshop.

Visitor tours are our contribution to preserving the history of brewing and are also a service to those interested in knowing how this national beverage is made. Therefore, we also plan future openings of our breweries to the public and the restoration of not only their valuable historic buildings but especially the stories and the skills of the people behind them.

We care for old brewing crafts!

There is no other place to serve your brewery cooper apprenticeship 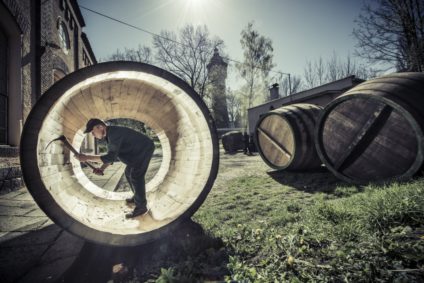 Plzeňský Prazdroj coopers have taken a decisive step that will allow them to apply for inscription on UNESCO’s List of Intangible Cultural Heritage. The coopers of Plzeňský Prazdroj, probably the only followers of the once famous brewery craft practised at breweries all over the world, were entered on the National List of Intangible Cultural Heritage of Traditional Folk Culture of the Czech Republic in late 2018. Their advance to the national list was preceded by inscription on the regional list in 2017.

The eight brewery coopers of Plzeňský Prazdroj represent the continuation of a famous tradition whose origins date back to the start of brewing of the famous Pilsen lager 177 years ago. During the heyday of the craft, the Pilsen brewery employed about 150 coopers. Prazdroj is probably the last brewery in the world maintaining the tradition of this craft.

Coopers play an important role in Pilsen – they take care of the lager barrels and oak kegs in which Pilsner beer ferments and matures. Thanks to their work, brewers today still compare beer maturing in modern cylindrical-conical tanks with beer maturing in the traditional way.

The barrels are drawn by horses, just like back in the past 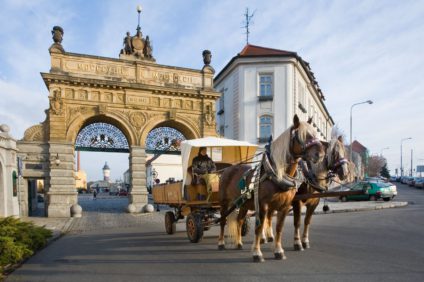 Horses pulled carts with barrels of Pilsner beer from the very beginning, which is why supporting brewing-related traditions is so important to us. Horses were used at the brewery until 1957, and the tradition was renewed in 1990 by Jan Šůs, thanks to which brewery horses and decorated carts with kegs can be seen in the streets even today. Carts with kegs pulled by horses could hardly survive without long-term financial support from Plzeňský Prazdroj.

The current coachwoman, Jana Šůsová, who took over the craft from her father, distributes beer across Pilsen every week with her two mares – Barna and Bajka – and is starting to train a new brewery horse, Breta.